See anything wrong with the picture?

How about this one? 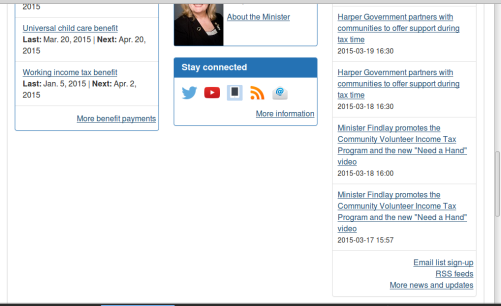 Close up of the right pane under news. I came across this before when doing my taxes in 2014. I copied the web address but didn’t take a screen shot. The address doesn’t go to any web page now. 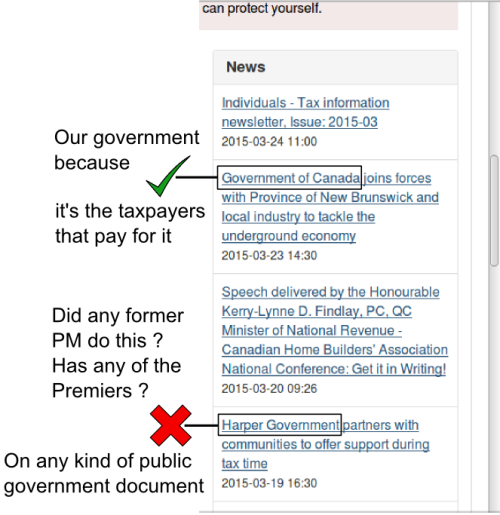 Oldest at the bottom and newest at the top. Repeat after me it’s the Harper Government and not the Government of Canada. 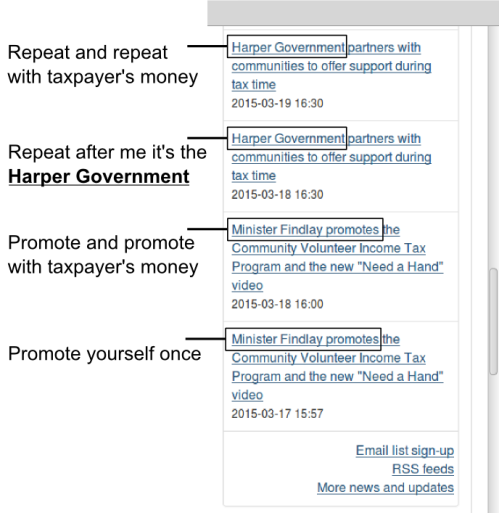 I remember the roll out of Canada’s New government phrase but didn’t know that afterwards they shifted to the “Harper Government”. To me this is illegal, he is not the owner and if the real owners don’t seem to care. What’s to be done? If a government you support can do this than a government you oppose can do it as well. Do you design the system fail safe or fail deadly?

An alternative to the current process used in Israel.

Greater stability since the Knesset establishes confidence in a government right at the start of a new Knesset and the government serves for the duration of that Knesset which has a fixed term and election day. Only by super majorities can this be changed. An absolute 2/3 majority to replace the current government with a new one that then serves till the next election or a 3/4 majority vote that actually does dissolve the Knesset and triggers new elections.

The power of Democracy is vested in the majority and in the minority it’s principle.

Legislative motions are either Bills or Resolutions.

Bills if passed by Parliament become Acts of Parliament and have the force of Law.

Resolutions are non-binding legislative motions that if passed by Parliament do not have the force of Law being only an official statement of Parliament.

Only the Council of Ministers (the Government) or Council of Opposition (the Opposition) can introduce Bills.

Resolutions can be introduced by 1% of the House membership or 4 members.

All legislative motions are introduced into the House of Commons.

On Monday all legislative motions are introduced into the House of Commons.

To pass a motion of closure requires the following votes as a percentage of the full House.

On Wednesday the House of Commons goes into legislative session at 1 PM and votes to pass any legislative motions. The government and opposition each get 10 minutes to make a last speech on the Bill/resolution before the vote. If passed it goes to the Senate.

On Thursday the Senate of Canada goes into legislative session at 1 PM and votes on any legislative motions passed by the Commons on Wednesday. If nothing passed the House the Senate will be in regular session.

Any legislative motions that passed the Senate on Thursday are given royal assent on Friday by the Governor-General.

The power of Democracy is vested in the majority and in the minority it’s principle.